{pretty, happy, funny, real}
at the Museum of the Hooked Rug and Home Life
in the Acadian village of Cheticamp, Nova Scotia, Canada

It may not sound like a thrilling place to be, but on our recent 10th anniversary trip to Cape Breton Island, my husband and I stopped here on the recommendation of a friend. This museum shows a glimpse of life for the Acadians in the area about a hundred years ago. It also showcases many antique hooked rugs, an art made famous by the women of the Cheticamp area. The museum also houses the hooked rug gallery of Elizabeth Lefort, a famous rug hooker, whose work has been given to royalty, presidents, prime ministers, and even popes.

What follows are some of the photos from this museum, and my reflections on this not-so-very-far-removed lifestyle.

First off, Cape Breton Island is a beautiful place, and I would highly recommend the journey! We kept to the Cabot Trail for our short getaway, and explored only a fraction of the spectacular natural wonders, fascinating history, and rich Acadian/Celtic culture. 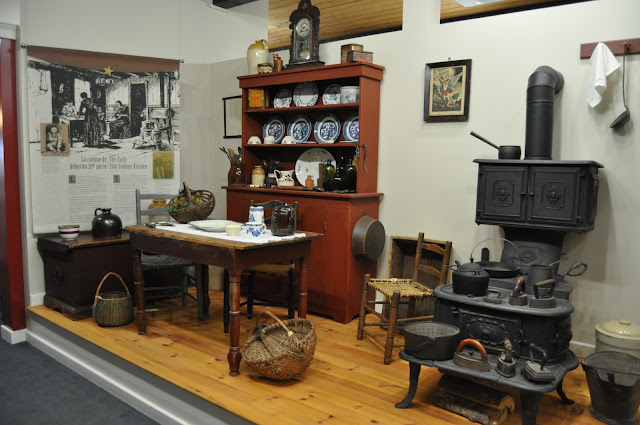 I have a strange relationship to the lifestyle of the families of the past - part admiration, part envy, part . . .  shame? 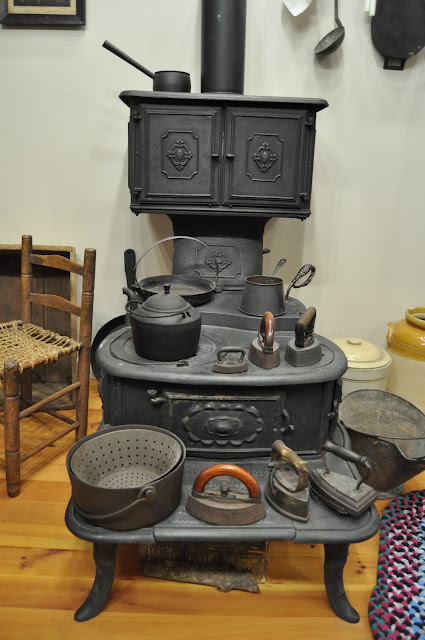 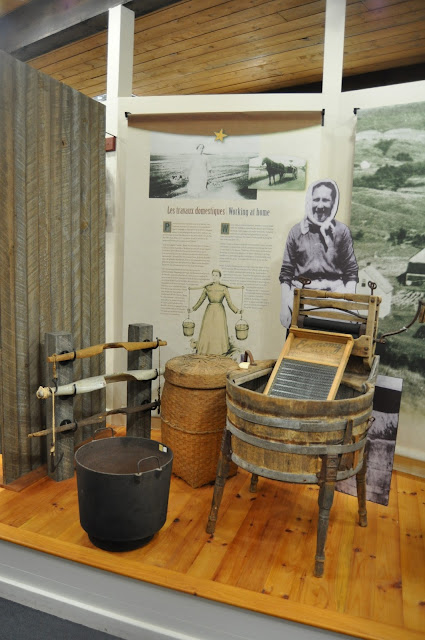 I admire their ability to carve lives and homes out of practically nothing - farming, fishing, mining, and doing whatever it took to survive and eventually become prosperous. I admire how hard they must have worked, how resourceful they were, and how they still made time and space for beauty in their homelife and crafts. 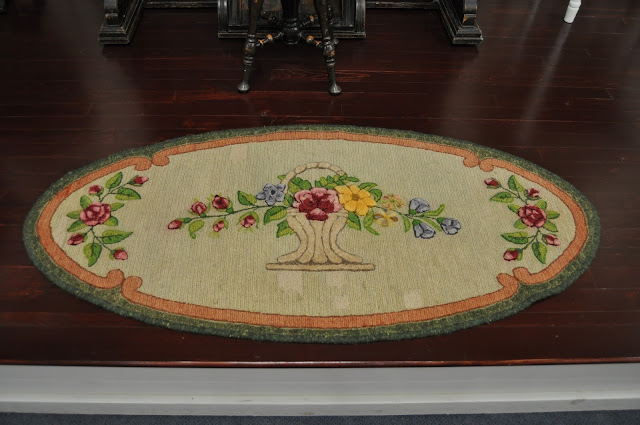 I envy the "simplicity" of the times, even though it brought its own limitations. I envy the community,  the tightly-woven networks that held people together for better or worse. I envy the lack of "stuff." I envy the skills that were passed down from woman to woman, the "collective memory" as it were. I even envy their lack of choice, though I'm sure many a feminist or modernist would berate such a notion. Their circles were small. In many ways, life was set for them. There wasn't an endless parade of "you can be whatever you want to be," which I have often found counterproductive to simply getting on with the task at hand, or choosing a path and being content with it. There really was no possible way to live outside of one's means, and though I'm sure the catalogues of the day must have provoked some wishing for more, a lifestyle just beyond their reach was not bombasting them at every turn. 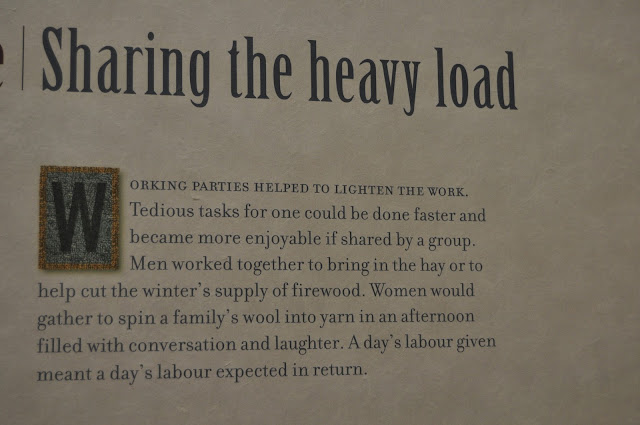 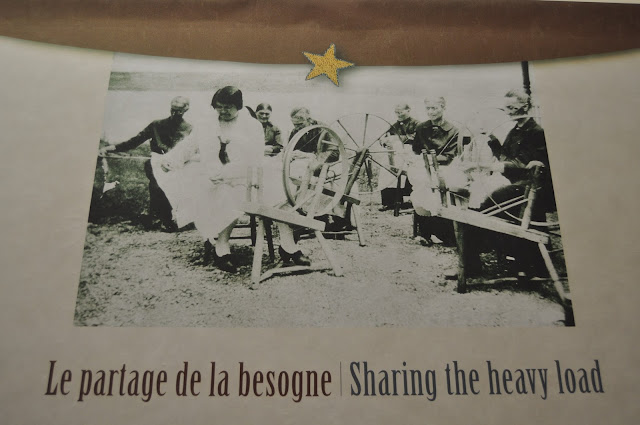 And I can't help but feel somewhat ashamed. At what, compared to them, seems like my own laziness, selfishness, or complete incompetence. Much as I have always been nostalgic for these simpler times, could I have survived them? I can barely survive my own world of modern conveniences some days. But then I wonder, is there something wrong with me, or is it a symptom of something gone wrong with our modern world? 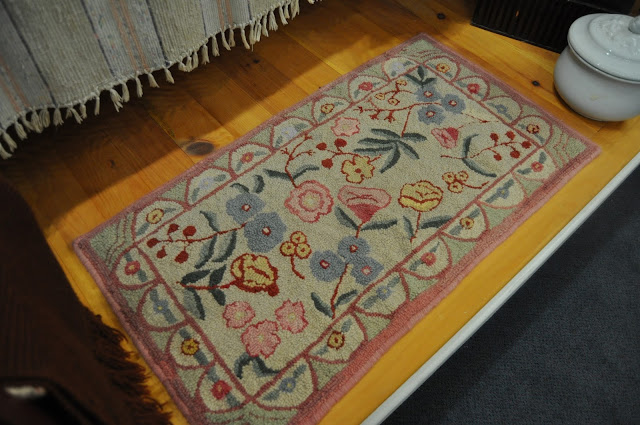 I do leave these glimpses of an earlier life feeling inspired though. Inspired to bring something of this beauty, simplicity, and pride of home into my own life. Inspired to work hard, to devote myself to the life we're building as a family, and to find contentment and joy in common things.

The variety of hooked rugs on display, both antique and more recently crafted, were truly beautiful and fascinating.

We were given a demonstration of how the rugs are made. Canvas is stretched on a frame to open the holes of the fabric. A pattern is then drawn on by hand. The hooked needle (still made locally from a nail hammered into a wooden base, then bent into shape) pulls the wool up from underneath, in little loops of equal height. There is no knotting or tying of the wool; it is simply cut off when a new colour is needed. The loops are hooked so close together, that when the canvas is taken off the frame, they shrink into a tightly woven material. The pattern is cut out of the canvas, with enough of a border to fold and sew under. The rug is then ironed on both sides to further shrink the wool and keep it all together. 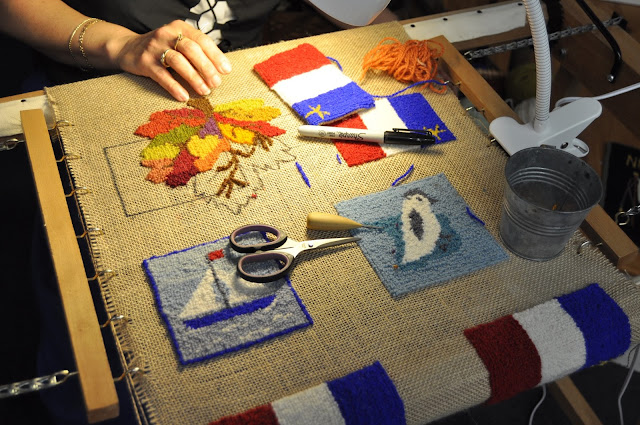 In this area, the hooks are still handmade, the wool dyed locally, and the rugs made by hand by the women of the community. 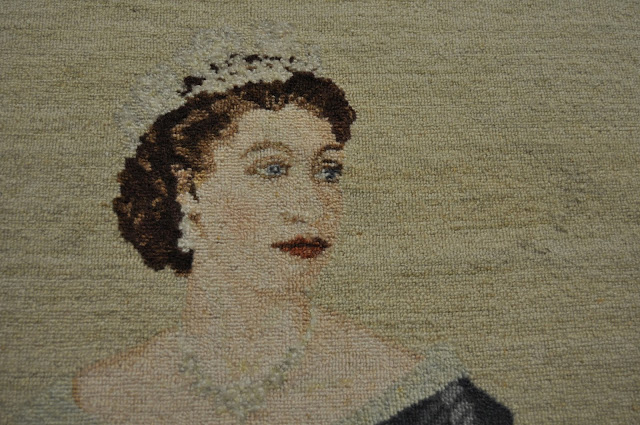 Elizabeth LeFort also created a collection of stunning religious rugs. I was amazed at the size of some of them!

To commemorate our tenth anniversary, we brought home this humble hooked rug. It is a "Tree of Life" design, made with leftover scraps of wool so that no two designs are the same. I think it is a beautiful symbol of the life of marriage. (I didn't think to take a picture of it till evening, in not-so-great lighting.) 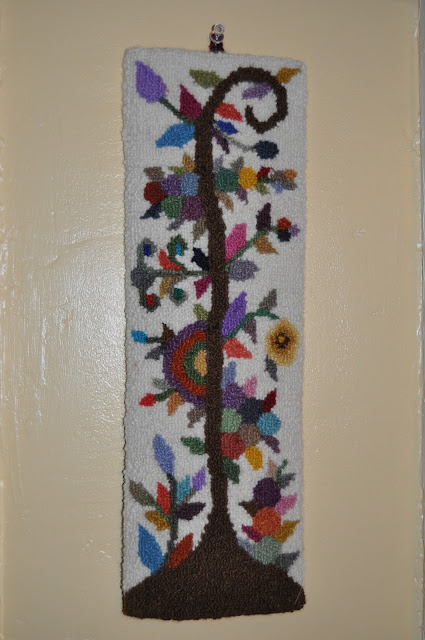 A beautiful way to bring the traditions of the past to life in our home. 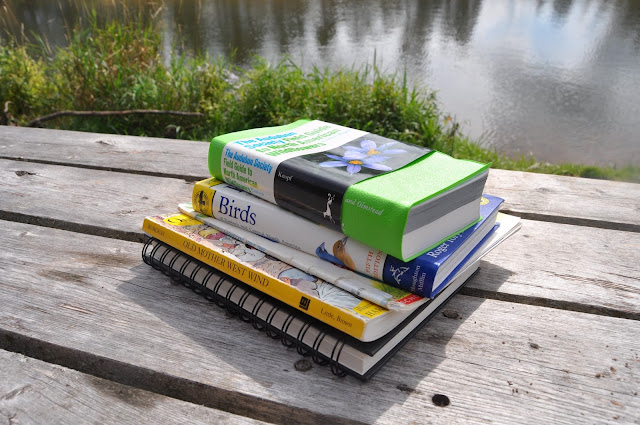 We've begun our homeschooling journey! One of the aspects the kids and I both love is nature study. On Wednesdays we've been walking down the red dirt road to the pond and bringing our books with us.

Some days we go out into the backyard and find lots to observe there, too. 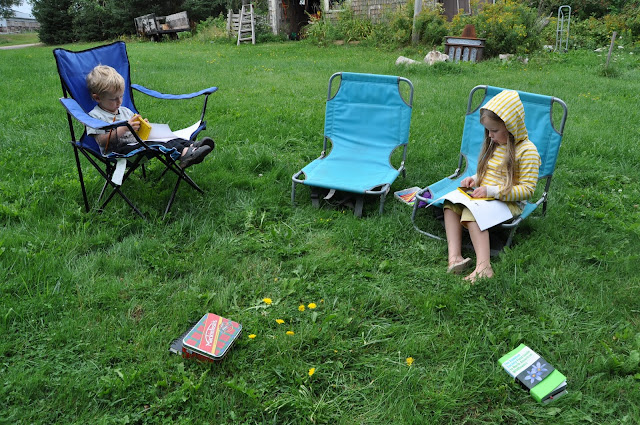 This "little" creature shared the chair with me. Thankfully the kids are in insect fascination mode these days! 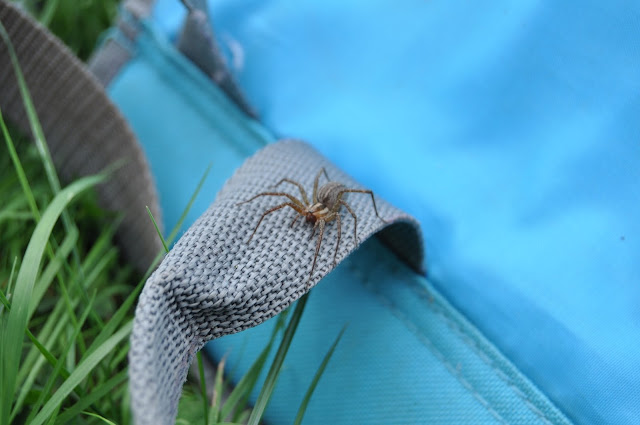 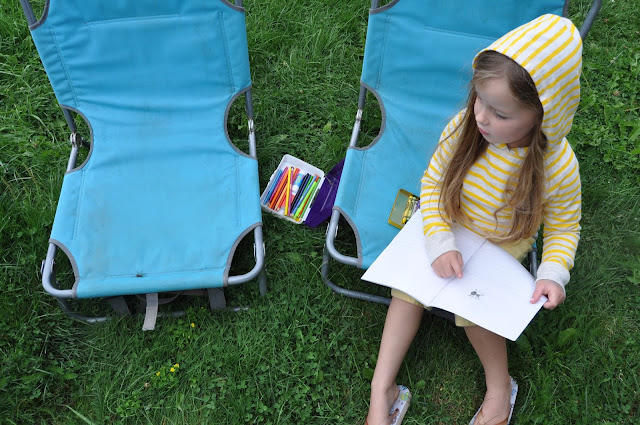 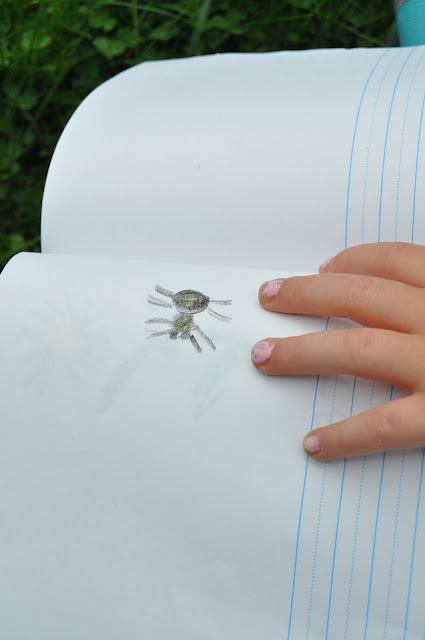 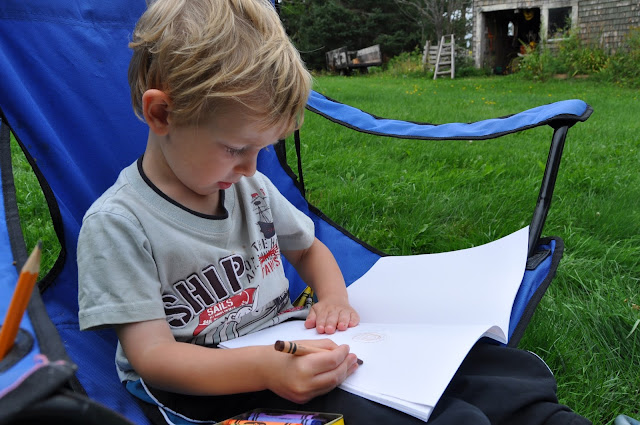 Today is October 1st - our 10th wedding anniversary! Happy day to us! 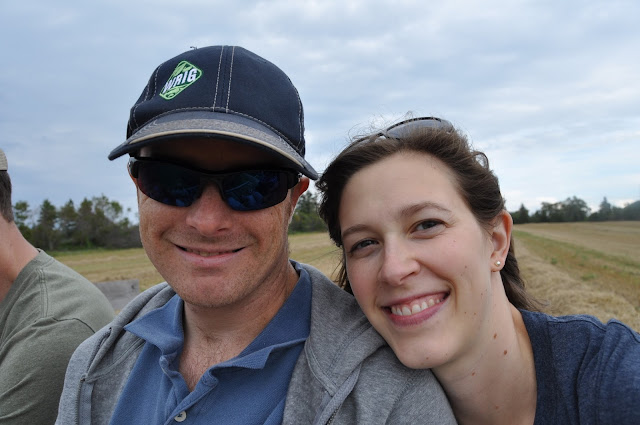 This picture was taken recently at our annual church corn boil and hayride.

And here is a happy girl, starting step dancing lessons. And I'm happy I only have to drive 5 minutes to lessons! 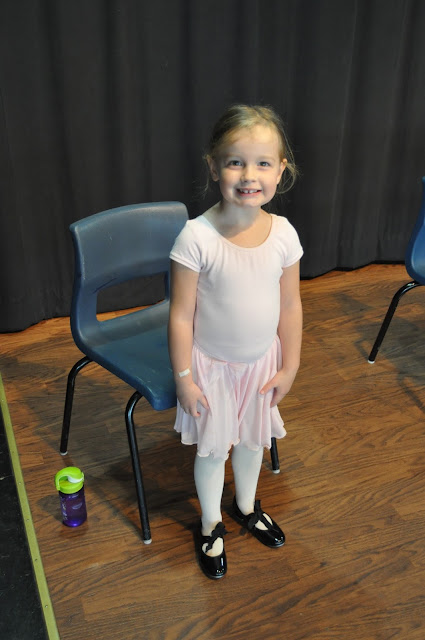 And happy wouldn't be complete without a little bit of ice cream. . . world famous ice cream at that! 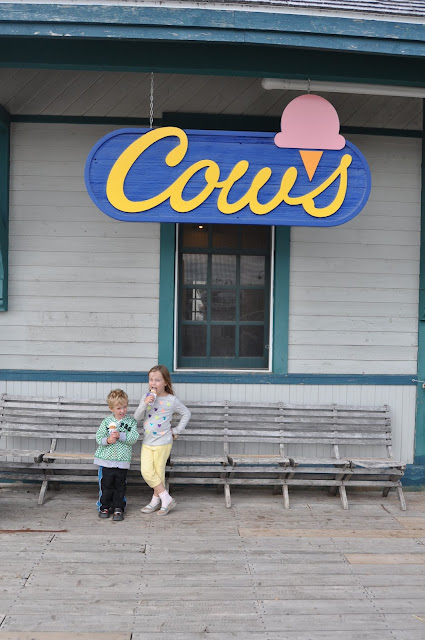 We've had a few light frosts, but some of the garden is still going strong. I saved the tomato plants by covering them with a big tarp. Some of the leaves are dying, but the plants are still surviving. I'm hoping to ripen more of the fruit on the vine before I bring what's left in to finish ripening in the basement.

I call this, "The Forest of Swiss Chard." It's mythical, really. 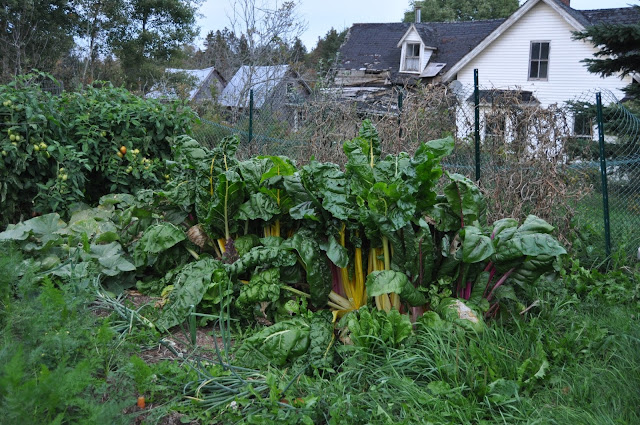 Turns out, we only have so much of an appetite for swiss chard! And it grows so well! The colors are beautiful, no?

We had an ideal view of the lunar eclipse on Sunday night! The kids were tired after a sleepover the night before and busy day with church, but we let them stay up a little bit and sit on the porch with us. We had an impromptu lesson on lunar eclipses with our globe, a paper plate, and a flashlight. This was Arden's unprompted "narration" of the lesson! 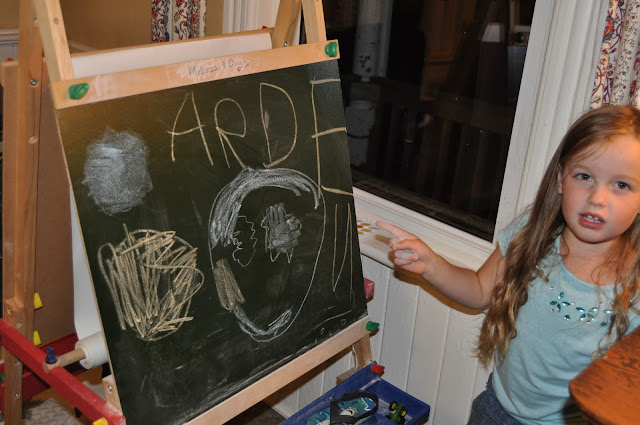 Then we headed out on the front porch to admire the "super harvest moon." The kids insisted on climbing out the window. . . . 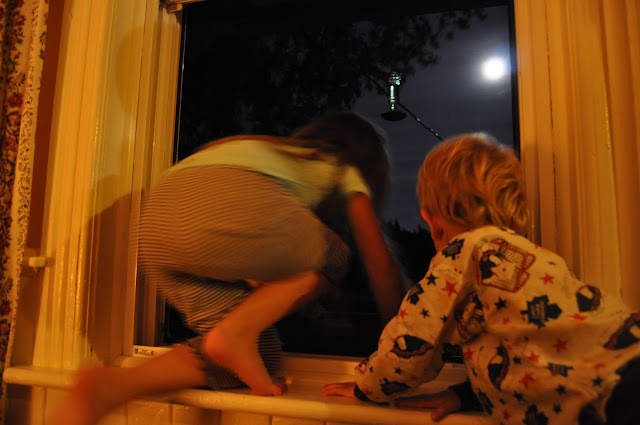 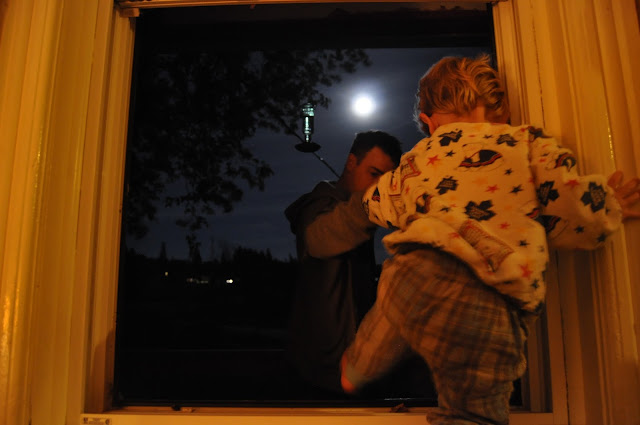 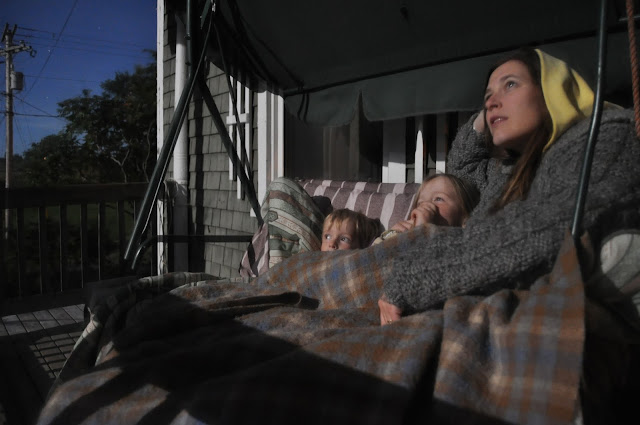 The eclipse itself didn't start until after 10 pm our time. The kids were both falling asleep out on the porch. We took Jack to bed. Arden wanted to stay up, so we let her settle into a chair in the dining room and promised to wake her up when the moon was red.

The trouble was, she wouldn't be woken! The poor thing was so tired. We brought her out on the porch, and tried to wake her, to no avail. She was heartbroken in the morning. :( It was a difficult start to the week. I wrote about it here.

At about 11:30 the moon was eclipsed. This is a picture taken around that time, and though it doesn't look completely red here, it was to the human eye. (We don't really have the lens for good moon pictures!) 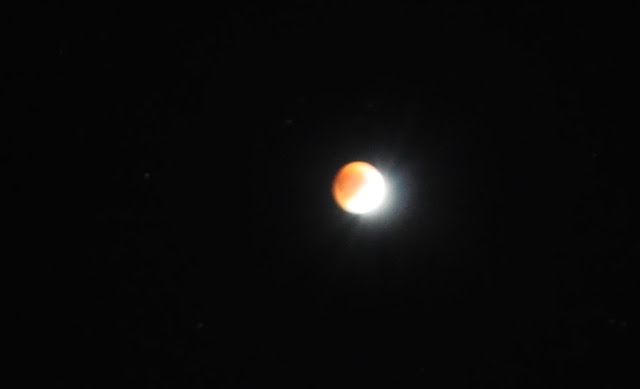 Happy October to everyone!