Amidst a lot of grey days of late, this was a pretty-ish sort of afternoon spent on the front porch.

I recently did some kitchen and pantry reorganization, and I must say I am quite satisfied with the results! We moved the microwave to the kitchen, and created a dedicated bread counter in the pantry. All this was brought about because I wanted to try a beverage station in the pantry, out of the way of whoever is working in the kitchen, with a place for all of Micah's coffee paraphernalia and beans. I also relocated Arden's kitchen where it wasn't spilling out so much into the kitchen traffic. So far it's working out great!

~ Lots of detailed description of photos... especially for you, Mom!

These two had quite the set-up on the living room floor the other day. As soon as I put Jack on the floor these days, Arden wants to join him! Every blanket she can find is put into use. And then, of course, the dollies have to have their own bed as well.

We had to say goodbye to our darling cat Scratchy yesterday. It was a sad day, but her time had come. (Scratchy's memoirs can be found here!) 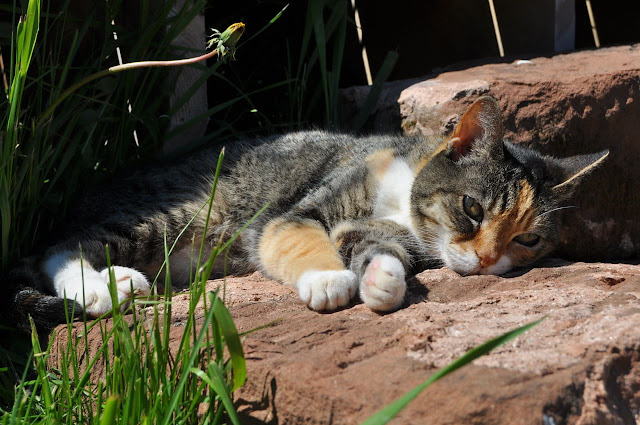 The wind was different. The old cat crouched in the dark of the hallway by the screen door, and she knew it. It was a restless wind, a portent of the change to come. She stared through the door and into the night. In and out, out and in, she had been going all day, senses poised to catch the first hint of the forecast. And now she knew in full. So she simply sat and waited, four white paws tucked neatly beneath her slender body. There was nothing more to do. Even cats cannot change the weather.
She thought of running. But then she considered the benefits of a warm, soft corner of the couch, perhaps draped with a hastily thrown article of dark clothing, and reconsidered.  She hated wet fur and muddy feet.
She wasn’t about to toss away over eleven years of pristine paws. Eleven years, maybe twelve…

Her earliest years were a dim memory, and she liked it that way. A vague recollection of chaos, of cowing in corners, of starvation . . . a small shiver made the fur on her spine tingle. Uncertainty. And then, a human who took a second glance. A human who perhaps had as much pent up energy as she did. He gave her an inch, and she took a running leap up one side of his body, around his neck, and down the other side – ears flat, tail straight, claws out. It was love at first sight.
He called her Patch in the beginning, but then a more suitable name took hold – Scratchy.
Scratchy of the wild north, a frenzied furball of neediness. She lived up to her name. One never knew if one’s claws might be required, so best keep them out and at the ready. She settled into her new home, but not without bouncing off every wall first. The food bowl was always full, and there was always someone to play with. Her own human’s chair was especially comfortable, and she took it as a sign of happy days to come.
She wasn’t settled long, however, before she was stuffed into a small red car with a giant TV in the backseat and packed across the county, in the middle of winter of all times. What a trip! It must have been 50 hours of driving, and the human only stopped for cat naps.
They arrived in a new province. At first she stayed in a house with some new people, but her human visited every now and then. She had a big yard of her own, but she preferred to stay in the house, as close to the people as possible. She had a great affinity for feet, following them when they moved, rubbing up against them when they stopped. She felt rather sorry that these creatures only had two, and delighted to show off her quick quartet of nimble paws.
And then one day her human came for her, joy of joys, and she found herself in a new apartment. She felt instinctively at home, now with two humans to call her own. The apartment was small, but it had two windows looking out onto a busy street, and perfect sills for perching. From there she could survey her entire domain. Once in a while she ventured into the tiny back yard or sniffed the car tires in the parking lot nearby, just to make sure all was in order.
She took it upon herself to personally welcome every visitor, allowing them the pleasure of her company on their laps, and graciously sharing her furniture with them. If they petted her, she took it as a sign of everlasting friendship and thus proceeded to rub every inch of her fur on them in delight. How could they be anything but delighted in return? Even though she never was allowed to sleep in the bed, those were a good four years. The humans found her antics most amusing, and she was rewarded with the most satisfying squeezes.
What followed, however, was rather stressful. She was unceremoniously dumped into a cage and made to endure another trip across the country, further east. She hated the confinement, so she summoned her best yowls of distress and employed them incessantly till she was released to roam the car in freedom. Oh, she knew how to get what she wanted.
When the car stopped, the air was different. Salty. Fishy. Yes, this place had definite potential. She was set free in a big, old house. Alas, the bedroom was off-limits yet again, and even her continuous methods of aggravation were ineffectual.
Then came the baby. Sensing shifting allegiances, she was rather miffed at the start. Who was this hairless kitten whose merest whimper demanded her people’s complete attention? But she soon made peace with the new situation, just in time for relocation to yet another house.
This one was different. It too was big and old, but it was in the country. It was a permanent sort of place, surrounded by delicious smells. The mice were rather frightening, but by this last summer she conquered her trepidation and brought home her first rodent conquest, laying it at the back door for the humans’ approval. They responded in due amazement, and she mentally ticked another item off her bucket list. She was becoming quite fearless, in fact. She stayed out longer and roamed farther. She tussled with other feline intruders and defended her territory. She made new friends. She kept a watchful eye on the children.
Ah yes, the children. For now there were two – a toddler and another baby. The toddler was affectionate, if a little rough. The baby was just reaching the point of trying to stuff an ear into his mouth. But she lapped up all the attention she could get. That had always been her modus operandi, and it served her well.

She could smell the rain coming now. She sighed a wheezy little sigh. These last years had been difficult too. She was slowing down, stiffening. Something was not right, though she couldn’t quite put her paw on it. Perhaps this is how one feels at the end of the ninth life.

That last night there was a big bowl of milk, in one of the good dishes no less, on the floor by her food. Her people had practically smothered her with hugs and kisses and squeezes. There were various blankets strewn about with a strange intentionally in the living room. But she took up a spot on the old church pew in the hall, near the door, paws resting on one of the baby’s blankets. The rain began to fall, and she began to purr…

The morning dawned cool and fresh. The storm had passed quickly, and the northern sky was scrubbed clean and blue, with a few sudsy clouds blinking at the autumn sun. When she heard her people waking up, she started her usual yowling till they came downstairs. Half-annoying, half-endearing, that’s what they said with misty eyes and a smile. Oh, but they would miss her, she thought, as she ran out into the yard to drink out of the discarded toilet bowl by the shed. They were calling, but she took her time, savouring the rainwater, sniffing the wet grass, scampering across the lawn. She didn’t mind the wet paws this time.

This was one of those late summer evenings, an impromptu trip to a half-forgotten provincial park in Bonshaw. 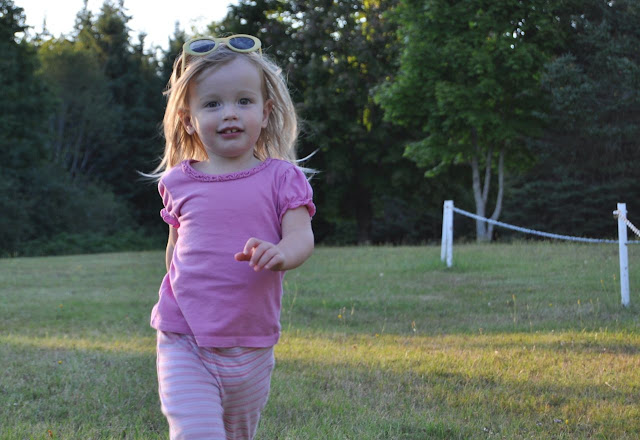 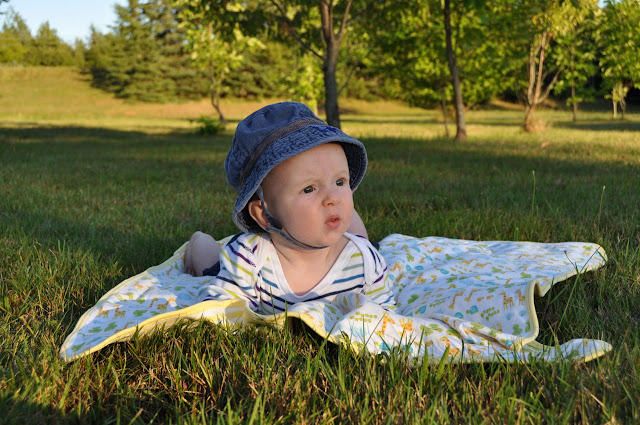 Arden was quite excited to try out the slide. Once she and Daddy went down together a few times, she quite happily climbed up and slid down herself! 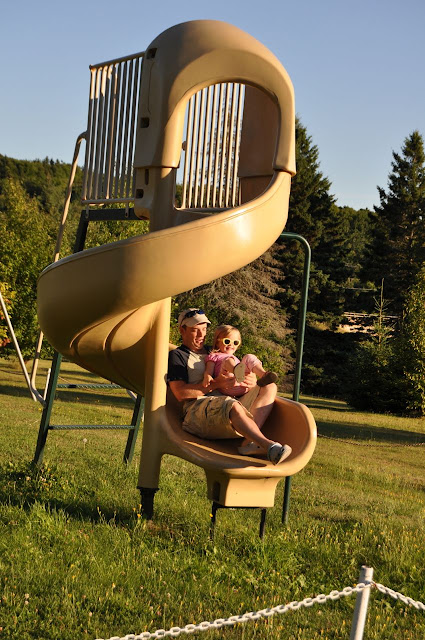 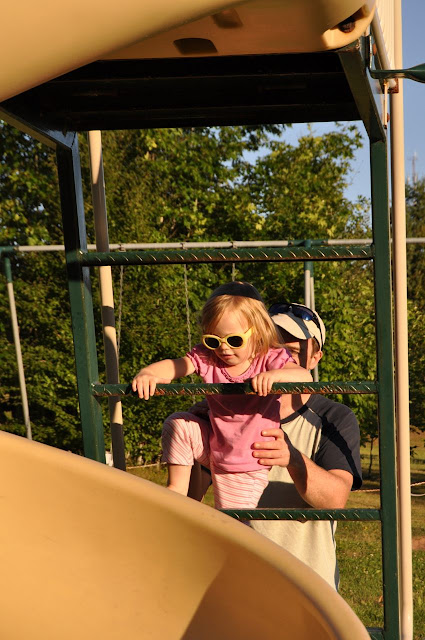 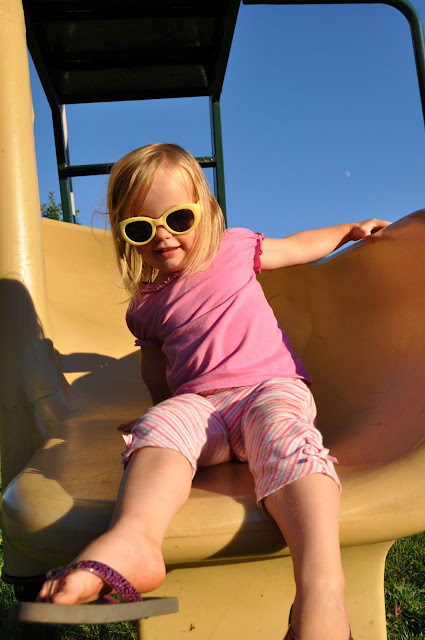 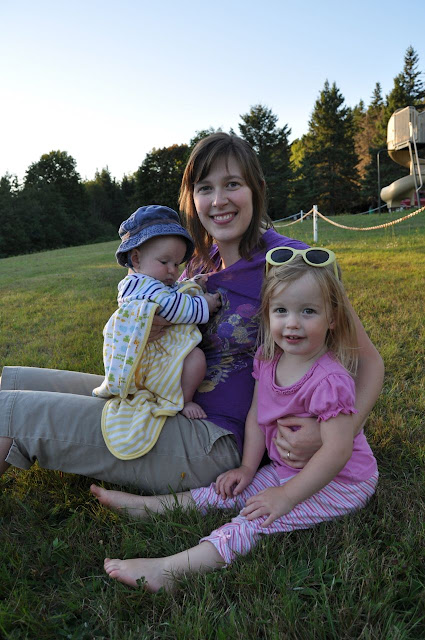 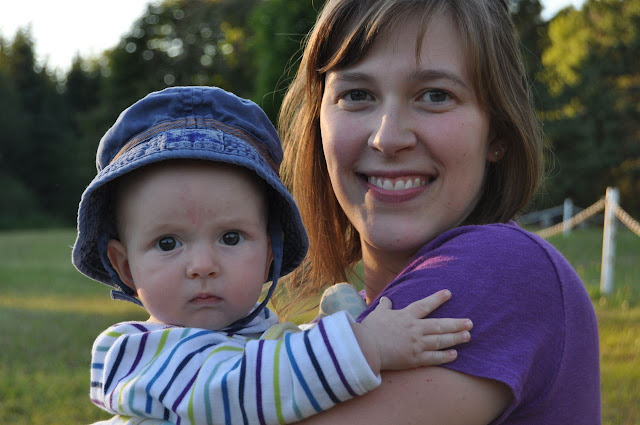 Happy to be Mom! 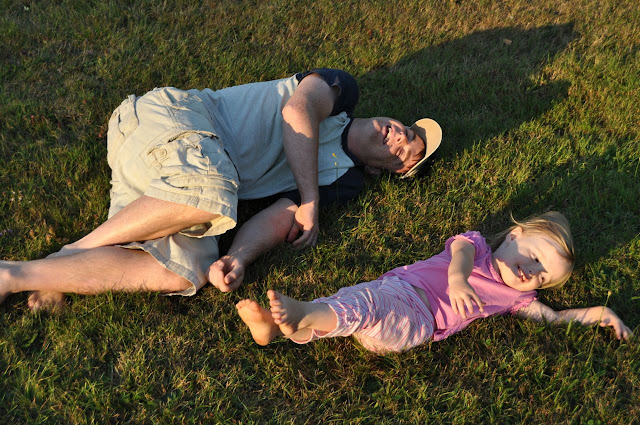 Not sure what shenanigans these two were up to this time.

Now this is my idea of a real man. 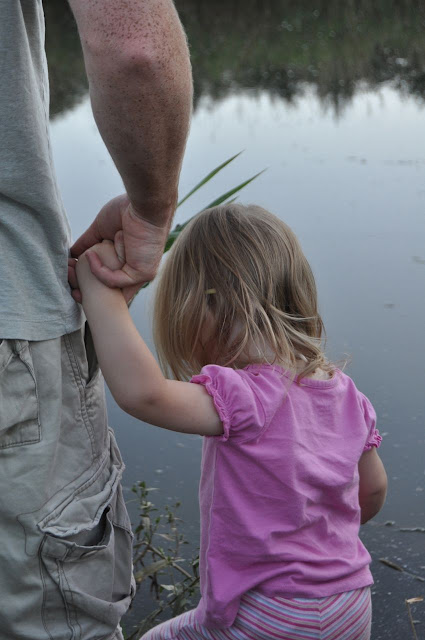 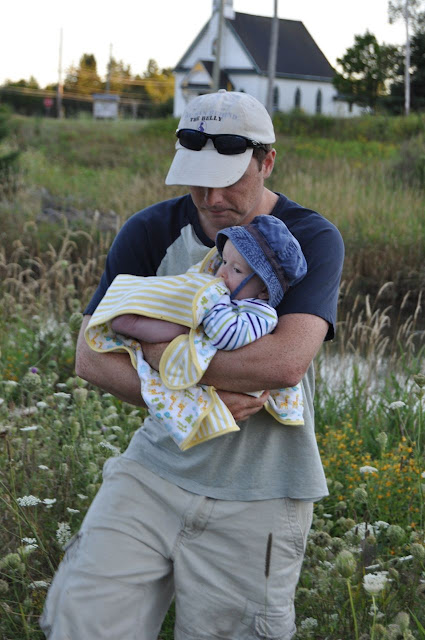 Arden and Jack are blessed to have Micah as their Dad!